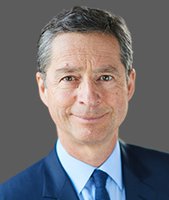 He joined Power Corporation in 1992 when he became its representative in Europe, playing a significant role in the financial and industrial transformation of Pargesa, the European investment arm of Power. Over the years, he sat on the boards of directors of group companies such as Imerys, Parfinance, RTL Group, Suez-Tractebel, Kartesia, AFE, Orior Food.

After serving as Vice-Chairman of Pargesa until November 2020, when Pargesa’s reorganization was completed, he remains a member of the board of Pargesa and Groupe Bruxelles Lambert.

Mr. Lefebvre has over 40 years of industrial and financial experience with numerous prominent organizations. He began his career in 1980 with Arthur Andersen in Montréal, before moving to Europe in 1982. He joined the Canadian manufacturing group M.I.L. Inc. in 1986, where he held a number of senior executive positions, whilst also assuming until 1991 the Chief Executive Officer role at Vickers Inc., one of the group’s larger operating units.

Mr. Lefebvre graduated from the École des Hautes Études Commerciales (HEC) in Montréal. He is a member of the Quebec Order of Chartered Professional Accountants.