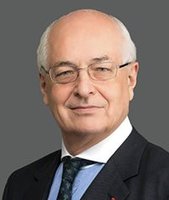 Mr. de Seze has been Vice-Chairman of Power Corporation since 2020. Previously, he was Vice-Chairman of Power Financial from 2010 to 2020. He is Honorary Chairman PAI partners, a private equity fund management company, of which he was President and Chief Executive Officer from 1997 to 2006 and a director from 2009 to 2019. He was a member of the Executive Committee of BNP Paribas, one of Europe’s largest banks, until 2004.