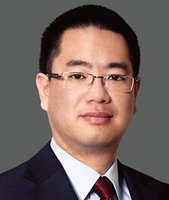 Mr. Pan has been Vice-President and Head of Corporate Finance of Power Corporation since 2008 and is a leader in the finance and corporate strategy teams. He was Vice-President of Power Financial from 2008 until 2020.

Before joining Power, Mr. Pan was an Executive Director in Investment Banking with Goldman Sachs International based in London, England. In this capacity, he specialized in Energy and Private Equity and was a member of the Global Natural Resources group. He was previously a member of the U.K. Advisory group, specializing in mergers & acquisitions.

Mr. Pan is a Rhodes Scholar and holds a Master of Philosophy in International Relations from Balliol College at Oxford University and a Bachelor of Arts (Honours) in Economics from the University of Western Ontario. His secondary school education was at the University of Toronto Schools.

Mr. Pan is active in the community, with particular interests in education and the arts. He is the Canadian National Secretary to the Rhodes Trust, Chair of Rhodes Scholarships in Canada (RSC), and a Director of the Canadian Rhodes Scholars Foundation. He also serves on the Board of Directors of Desautels Capital Management, the Opéra de Montréal and the Centaur Theatre.