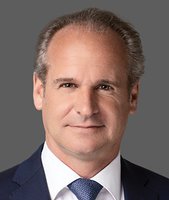 From 2003 to 2009, he served as President and Chief Executive Officer of Adaltis Inc. Previously, he held the positions of Vice-President of Business Development at Picchio Pharma Inc., and Vice-President of Mergers and Acquisitions at Credit Suisse First Boston in London, England.

Mr. Larochelle began his career at the Montréal offices of Ogilvy Renault. He sits on the boards of Power Energy Corporation, Nautilus Solar Energy and Bellus Health. He is also a Director and the Chairman of the Board of Lumenpulse Inc., Potentia Renewables Inc. and Lion Electric Company. He is also actively involved in various not-for-profit organizations and serves on the board of directors of the Fonds de développement des anciens et anciennes du Collège Jean-de-Brébeuf, of C2-MTL, an annual global conference on the relationship between commerce and creativity, and of the Sainte-Justine Foundation.

Mr. Larochelle holds a Bachelor of Laws degree from Université de Montréal, a Master in International Business Law from McGill University, and an MBA from the European Institute of Business Administration (INSEAD).