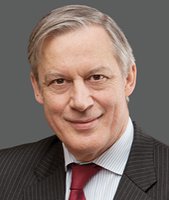 Mr. Noyer is a company director. Previously, from 2003 to 2015, he served as the Governor of the Banque de France, the central bank of France, which is linked to the European Central Bank. From 1998 to 2002, he was Vice-President of the European Central Bank in Frankfurt. After being appointed to the Treasury in the Ministry of the Economy and Finance of France in 1976, Mr. Noyer held a number of positions before serving as Director of the Treasury from 1993 to 1995, Chief of Staff of the Minister of Economic Affairs and Finance from 1995 to 1997, and Director at the Ministry for Economic Affairs, Finance and Industry from 1997 to 1998.

At various times from 1982 to 1995, Mr. Noyer served as a member of the boards of many partially state-owned companies as a representative of the French Government, including Suez, Société Générale, Le Crédit Lyonnais, Le Groupe des Assurances Nationales, Dassault Aviation, Pechiney, Air France and Électricité de France.

Since January 2018, Mr. Noyer acts as a Director of the NSIA Group in Africa and serves on the Board of Directors of Setl, a company dedicated to creating blockchain-based solutions for financial markets, asset management and payments. From 2018 to 2020, he was a Non-Executive Director of Lloyd’s Council and served as an independent Non-Executive Director of Lloyd’s Brussels Board. In April 2019, the Board of Directors of BNP Paribas has appointed Mr. Noyer as censor.

Mr. Noyer is the Honorary Governor of the Banque de France and has been awarded the honours of Commandeur de la Légion d’Honneur and Commandeur des Arts et des Lettres in France, Commander of the National Order of the Lion in Senegal, Great Cross of the Ordén del Merito Civil in Spain, Officier de l’Ordre National de la Valeur in Cameroon and Gold and Silver Star of the Order of the Rising Sun in Japan.